So about a month ago, my boyfriend broke up with me. I’ve been depressed for the whole month of December, but I’m kind of happy it’s over, because unbeknownst to everyone, my relationship was very verbally abusive. Throughout the months he and I were together I would get called stupid, immature, selfish and insecure on a regular. In addition to that, when we would have a disagreement he would tell me hates me and say f you to me. Despite all that abuse, I still didn’t see our break up coming, so I have been a hot mess. However, I have started to heal and I am ready to enjoy this new year. Usually I wouldn’t put my business out there like this so soon, but I have to give background in order for you all to understand the craziness that happened today. Get your popcorn ready!

So six months ago a random guy hits me up on Instagram. I accept everyone on IG, so I wasn’t really surprised that a random dude DMed me yet again. So his message says something like “Hi beautiful I’ve been reading your blogs and I know what you’ve been through it with guys so I didn’t want to hit you up, but my friend convinced me to shoot my shot, so here we go”. So I’m like aww thanks that’s wassup… and I leave it at that. Then the guy proceeds to ask me where I’m from and the whole whoopty whoop and I eventually stop responding. So the last six months he has been liking all my pictures, commenting heart eyes and the whole shebang. I haven’t really cared because:

So four days ago, I get the following DM on IG: 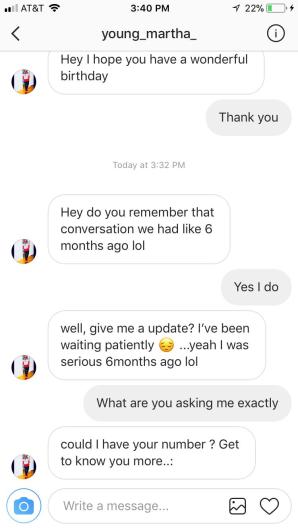 So I get this message and I’m like here we go. I tell my best friends what is going on and I send them screenshots so we can analyze the situation to try and decipher if this dude is worth giving my number to. See the screen shots below: 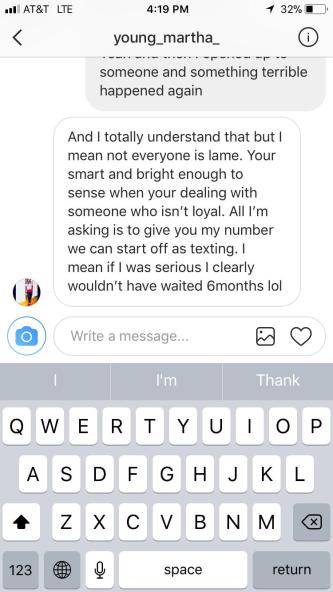 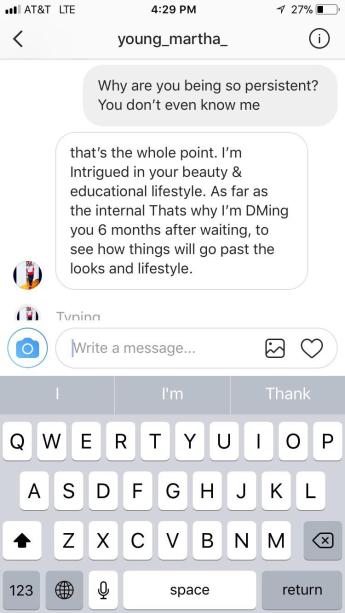 So after sending my best friends these messages, they both thought I should give him a chance.  I told them something seemed fishy and I didn’t understand the persistence, but they thought I was overthinking. I started texting this guy and everything is going well! Good conversation, he’s making me laugh and the whole nine. However, in my head I’m still like okay I’m going to focus on me I’m not talking to him to try and date, cause I’m damaged and I need a break. I communicated that with him and he said he wanted to build a friendship so I’m like okay cool.

So yesterday things started to get weird. First of all we Face Timed when I’m on my lunch and he hits me with the “You know you’re gonna be mine right?” (niggas love this line) which I ignore. Then he says “I want you to be my girl and I don’t want you talking to anyone else” so I’m like woah wtf I told you I’m not interesting in dating anyone and plus you don’t even know me you need to chill. So he’s like I’ll chill and won’t ask you to do that. I’m already feeling weird, but I kept texting him ignoring red flags like usually stupid Michaela.

So throughout the day he’s blowing my phone up and getting mad that I am not texting back right away so I’m like um okay I’m driving and making moves you need to relax. Then I text him about how my ex texted me and he says are you going to block him? I said no, because I feel a little less like crap seeing that my ex who broke up with me is now attempting to communicate with me, but I’m not going to respond. So this dude disappears for the whole night and I text him like are you salty lol.

So then today he hits me up and starts saying he sees why all my relationships didn’t work out and that he’s not going to keep talking to me if it’s going to be like this and I’d rather talk to my ex than him. So I hit him with the FIRST OF ALL… so I go back and forth with this random ass man and then after a while I’m like you know what? I’m about to block him. It’s 2018 and this is unproductive.

AFTER I BLOCK HIM

So I block him, I’m eating some chips and I’m like WOO glad that’s over and suddenly he hits me up from three other numbers. Here are some of the messages. In the message I forgot to screenshot, he basically said I blocked him for no reason and I am mentally unstable and he feels bad for whoever I encounter in life and also thank you for “getting his hopes up”

So that was the last message I received. I usually don’t put screenshots in my posts, but I had to show you guys I can’t make this shit up! It is so crazy to me that someone who got my number four days ago would go out of their way to belittle me and insult me. If someone blocked me I would just move on. The fact that this dude really sat there and texted me from three different numbers just to talk down to me and try (emphasis on TRY) to make me feel bad disgusts me. This is the same exact thing my ex did to me and my ex before that.

The way that they treat us women is unacceptable and disrespectful AF and I don’t know about ya’ll, but in 2018 I’m not dealing with it. I think all these crazy situations is God’s sign of telling me to knock it off and TRULY focus on myself cause honestly I just keep getting myself in the most random unfortunate situations. Not today satan… this shit brazy!

I would love to hear ya’ll thoughts and I promise I am not fabricating this sequence of events. I think this is another sign (like I said in on one my other posts) that we need to take mental health seriously and people need to get help, because being so mean spirited and not being able to take an “L” is sick to me. What do you guys think?

3 thoughts on “This Sh*t Brazy! Couldn’t Make This Up”