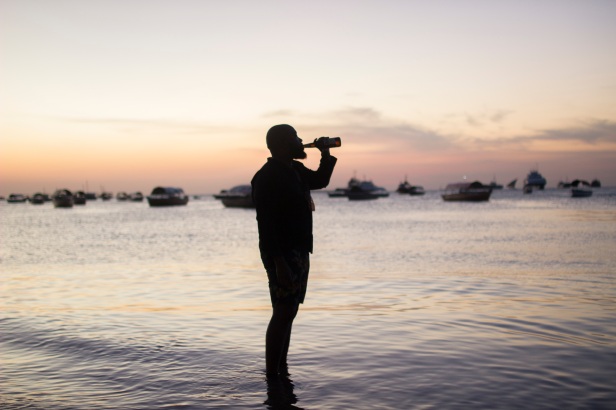 Freshman year one of my close friends was dogged by a man in a fraternity. He seemed all sweet and wholesome at first, but as soon as they had sex he started to neglect her and treat her differently. After hearing about her experience, I came to the conclusion that all the rumors I heard were true. He was 23 years old and he had manipulated, used and abused an innocent freshman. I often observed him walking around campus and the way he carried himself, I wasn’t even surprised. He walked like he was “that nigga” and it made me feel disgusted.

Sophomore year I joined a sorority. About a year later, I attended a party another school was hosting. I was so excited to party with my brothers and sisters in that area. About an hour into the party a man approached me with much enthusiasm; “Hi! I’m Dre from ________. I follow you on Instagram!” Dre was cute. I didn’t remember him from Instagram, but I was definitely interested after meeting him. I loved his energy and wanted to learn more about him. The next day he started to like my pictures and then we started to converse.

Dre was dope. It sucked he lived over an hour away, but he seemed genuinely interested in me so I didn’t care. He had a great sense of humor, we had intellectual conversations and he had goals that he was actively pursuing so I really thought this was going to go somewhere. Maybe all men in fraternities aren’t the same, I thought. Dre seemed so chill, not arrogant or fuck-boyish at all. Emphasis on “Seemed”…

Throughout that year I’d text Dre occasionally and converse with him at Greek events, but he’d never make time to hang out with me one on one. He was sending me mixed messages so I really didn’t know how to maneuver. I busted one thirst mission to go see him and it was a complete waste of my time. He seemed distant and non attentive AF and I had driven an hour and a half. I was so angry and disappointed. I really liked him, but eventually got discouraged, because even after my thirst mission all he did was make excuses and explain how “busy” he was. That was obviously a red flag that I ignored, because as people we make time for what we want to make time for, period.

One night we both attended a Greek party and Dre ended up coming over my house after. We had danced together the entire night so there was a LOT of tension. I had fought having sex with him the whole year, just in case he was full of shit seeing that he was so inconsistent, but that night I was ready to risk it ALL. We had sex for the first time and it made me really emotional. I asked him “What’s up? What are we doing? We been talking on and off for a year and we just had sex like how do you feel about me?” He told me “This isn’t a good conversation to have right after sex, I’m tired and its late. But I promise we will figure out what we are doing and talk about everything tomorrow.” I felt good that he promised to discuss everything with me and we went to sleep. The next day he left and we never discussed it. The day after that was his birthday. I wished him a happy birthday via text and he was really upset because he had gotten fired from his job. I told him that I was sorry and to let me know if he needed me to drive out there to see him. I got no response.

A few days later I was scrolling through Instagram and saw that he had posted a chick. I re read the caption over and over… #WCW. I gasped in front of my friends who were over my house and explained the situation. He was literally at my house three days before!! This was unbelievable. I started to read the comments and got even more heated “Finally”… “So happy for you”… “Aw look at my Soror” SOROR? I was PISSED. I went to her page and found out she was in a different sorority than me. I was appalled. I had protected myself from this man for more than a year and the moment I let my guard down and slept with him, he posts his girlfriend three days later?! I texted him a LONG text going off. I got no response.

A couple months later, I attended a Greek BBQ and he was in attendance with his girlfriend. His girlfriend was all over the BBQ introducing herself as “Dre’s Girlfriend”, but little did she know her boisterous actions would cause an abundance of tea to runneth over.

A conversation sparked between my sorority sisters and I and it turns out this nigga was WILDIN’. He was involved with multitudes of women and a lot of us were standing there at the same BBQ. I was so annoyed and in the moment I truly felt like SZA when she said “Why you bother me when you know you don’t want me?” Like what was the point of engaging with me and making all these false promises? As everyone shared their stories about how this man was trash, I felt like boo boo the fool.

After the BBQ, I saw him at a lot of events and would speak to everyone else and ignore him. I wasn’t even going to be fake, he didn’t deserve to speak to me. Months after they broke up this scoundrel texted me all apologetic. Initially I was mad and extremely dismissive, but eventually I stopped caring and forgave him. It didn’t make sense for me to be upset when he was out living his best life.

Although I know that its ignorant to generalize, most men my friends and I have been involved with who are a member of a fraternity have not treated us right. I haven’t even mentioned the one who had anger issues or the one who I flew across the country to see only to get Diddy cropped out of a picture we took. That same one who still sends random dick pics to my Snapchat and asks when he can come to Cali even though he has a “girlfriend” that he has been publicly claiming for YEARS. Or how about the one that told me he “loved me” while he lived with his baby mama cause he had “nowhere else to go”?  But those are stories for another day LOL. Thanks for reading, and make sure you share your feedback in the comments :).

6 thoughts on “RTR: Men in Fraternities”