It’s been awhile guys, but let’s jump straight into this. With talks of the next presidential election coming along, we have Marianne Williamson who has thrown her hat into the ring. Many of you might know her as Oprah Winfrey’s spiritual advisor, I myself have just heard of recently and that is because she made one really bold promise to the black community if she were to win the election.

Reparations. I know a lot of you young cats don’t know why that word is very important to the black community, but trust me it’s been owed to us for some time. Now as exciting as this sounded to me at first, we got how much she would give and in what time span she would give out. 100 billion dollars over 10 years, so 10 billion a year. She stated that it is our time to finally get what is owed to us after 200 years of slavery, 100 years of fighting for rights, and well all of the BS we still have to put up with today. She also went on to say that Holocaust survivors got 89 billons in reparations and Japanese got 22,000 in reparations so it’s past time we pay back African Americans. She would also give it to an esteemed council of black people who would see fit to delegate it to areas of need in the black community.

Ok, I have a few issues with this already. First off, I appreciate the sentiment however where did you come up with this 100-billion-dollar number? Not to compare tragedies, but 400 years of free and abused labor plus having your language, history and beliefs forcefully taken from you is worth a tad bit more than 100 billion dollars. I’m thinking more in the trillions area, but that’s just me. 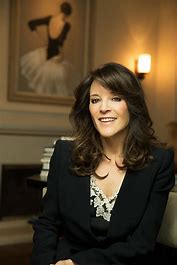 Who would you get to be apart of this council of elite black people? As we all know both the left and the right are notorious for hiring Uncle Toms in their ranks. You know the type who worship master and think slavery was the best thing that happened to us. I’m going to keep saying this, but it’s important that we learn about our history. Not only here in the United States, but also in the mother land of Africa.

Miss Williamson, I challenge you to actually look into our circumstances and see if 100 billion dollars is an actual fair amount and if there will be an elite black council, I hope you let us decide who they are. Of course, this is under the assumption that congress would actually agree to this bill (which is highly doubtful). You can find a link to her page and formulate your opinion there.

View all posts by cjwolf510