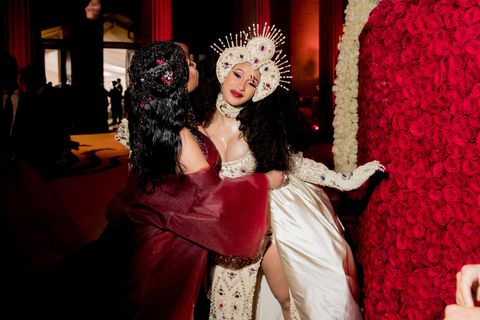 Earlier this week, everybody was tuned in to new developments in the beef between female rappers Nicki Minaj and Cardi B. Nicki Minaj went on her radio show Queen Radio to address numerous allegations made my Cardi and her sister Hennessy throughout the week.

In response to Nicki’s show, Cardi B. went on Instagram and posted a rant of her own along with some receipts. She ended her rant by saying that Nicki is making herself look like a hater. I love Nicki Minaj and throughout this entire beef I have been on her side, but at this point I have to ask… where’s the lie?

First of all, Nicki has been the only successful female rapper in the last decade. Yes there has been others with memorable moments here and there, but Nicki has by far been the most relevant. After ten years, Nicki finally has some competition and I think she’s responded in the most insecure way possible. From the moment Cardi stepped on the scene, Nicki has seemed threatened AF. She disappeared from social media to “focus on her music” while Cardi B’s career was on the rise, then she came back to release two new singles right after Cardi released her album. Coincidences? I think not. Then the nail in the coffin was when Nicki announced to the world that her album was done and would be released in June and then she pushed it back until August. It seems like she wanted to take the spotlight off Cardi so bad that desperate times called for desperate measures. The album was clearly not done and Nicki felt like she had to act now or be forgotten forever. Another mess was when Nicki announced her Nicki Hendrixx tour that she would co-headline with Future. Everyone (including me) had purchased tickets and out of nowhere she announced that she would be rescheduling her North American tour for next year and that Future would not be joining her due to scheduling issues. Like WTF! Nicki has been looking so sloppy and unprofessional. In addition, her live performances have been lazy and boring. It’s like she is Mariah Carey now, such a diva and so entitled that she feels like it’s okay to put in minimal effort.

The thing that makes this embarrassing for Nicki is the age difference. Nicki is literally ten years older than Cardi and she is entertaining this drama. As much as I think Nicki creating Queen Radio was a BRILLIANT move, she should be using her platform in a more positive way, not to gossip and promote drama. It’s like Nicki has no humble bone in her body and she has to constantly remind us of all her accomplishments. Just because there is someone new, does not mean your legacy will be forgotten.

But Cardi isn’t innocent here. She needs to grow up and build a thicker skin. She is constantly getting upset at people’s comments and I think it was tacky for her to approach Nicki like that at such an upscale event. Although you should stand up for yourself, Cardi really made herself look unclassy as hell. She is constantly threatening people and arguing with people online and it’s like you are a successful artist and mother, why are you even giving this time and energy?

I really hope that these women can co-exist and stop the pettiness, because quit frankly, it is getting out of hand. Imagine if they decided to be friends and collaborate? We would have some fire music and it would send a message that two successful artists can co-exist and not feel bothered by one another. Although rap beefs have been going on for years, I feel that our beautiful black queens need to do better. Let’s try and uplift and support each other instead of dragging each other through the mud and trying to bring the other down. This is not a competition, this is your lives and careers, so continue to focus on your craft and do you. The unnecessary drama is just distracting to all the great things these ladies have accomplished. It was announced that Nicki Minaj and Cardi have called a “truce” and I really hope that it lasts. However, only time will tell.

2 thoughts on “Rap Queens Nicki Minaj and Cardi B. Need to do Better”