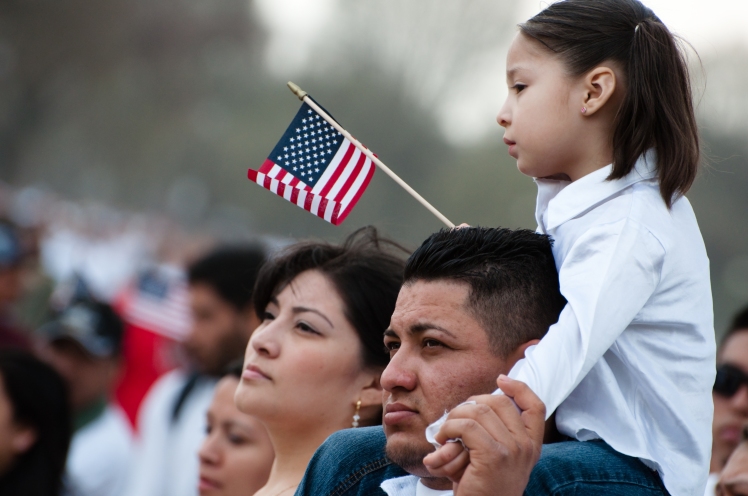 When thinking about immigration, it’s easy to focus on the plight of undocumented and dacamented people, as if they were the only ones affected by America’s immigration policy and climate of hate towards immigrants. I am guilty of viewing the citizen children of immigrants as lucky and carefree Americans. That started to change the day I watched Jose Vargas speak at San Jose State University. During the question and answer portion of his presentation, a female student stood up and spoke in tears about how growing up, she felt guilt about her citizenship when her parents and siblings struggled and lived in fear without it.

Since that moment opened my eyes to the emotional toll that the immigration issue has on the citizen children of immigrants, I have been curious about the life of these children. Upon discovering Paz Ellis, I jumped at the opportunity to ask her what challenges she faced. In our conversation she graciously offers insights into the challenges and responsibilities thrust onto the American children of Immigrants.“There are the people who have been here forever, and they take for granted what they have. And then there are people like me, whose parents came here as immigrants… and had to deal with a lot of their assimilation issues.” She says it was her duty to be a translator and bodyguard for her parents and other immigrants that needed her help.

Because her parents were hesitant to assimilate, especially her father, who refused to speak English even when it was evident that he understood. Her mother was embarrassed about her accent once she had learned it. From the age of six, she was going to immigration offices, embassies to deal with passport issues, the bank, and any other place where her parents, and other adults needed translation. She was embarrassed and scared because she was talking to adults, and had to listen in on adult conversations that she was not mature enough to comprehend. “It was my duty,” she says, “I didn’t have a choice. It was my duty to them.”

When they were in line at the DMV, she recounts how her mother was speaking in Spanish to her, and she overheard someone say, “these people should learn to speak English.” Though her mother understood, she didn’t say anything despite being someone who normally spoke her mind. Paz stepped up at that moment and responded on their behalf. “Excuse me, but we understand English perfectly. How many languages do you speak?” She’d always defended them that way.

She recalls the day she was walking home from work at Burger King with her father, who picked her up from a late shift so she wouldn’t walk the six blocks alone. As they walked, some young men were saying nasty things and catcalling to her in English. She had a feeling that her dad understood, but he was not a confrontational person, and didn’t want to get into a fight. However, the things they were saying to her were so gross that she had to speak up. I can hear the anger in her voice as she recalls telling them, “you guys are so disrespectful. I am his daughter! You see me walking with an older man and I’m sure you can get from this that I’m his daughter!” Her dad tugged on her and told her to keep walking.“I wish I could have been ten feet tall and all muscle because I would have beaten them up,” she tells me with the conviction of a woman scorned “and there were a lot of times like that, with my parents. I felt like I had to stick up for them.” When her father was sick, people would say things assuming her mom was his nurse, and she had to tell them, “that is his wife! Not his ‘criada’ (his maid), not his caretaker, his wife.” She was always on guard and overprotective of her parents that way. 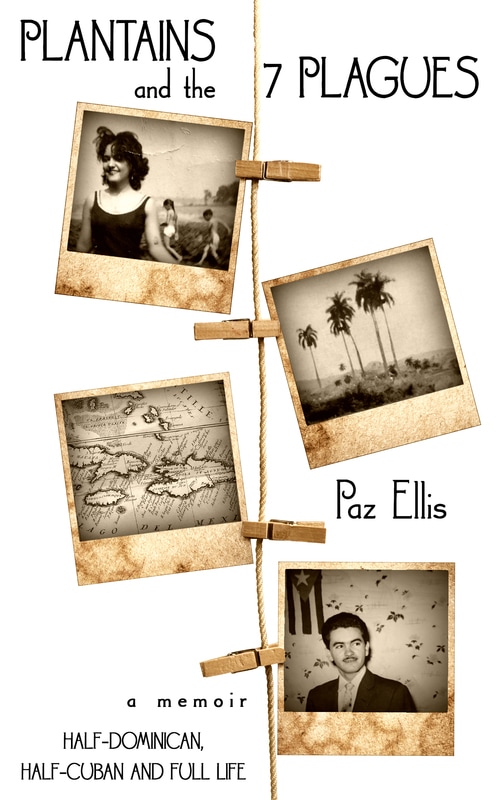 In her memoir, Plantains and the Seven Plagues: A Memoir: Half-Dominican, Half-Cuban, and Full Life, she details what her life was like, with a mother who suffered from chronic depression, and a father who longed to see his relatives again after leaving Cuba because of Fidel Castro’s regime. Writing her book in three weeks after her mother’s passing is how Paz dealt with the grief she felt. She did and still carries some guilt about going away to college, which her parents initially did not want her to do. If it were up to them, she would have gotten a job as a secretary and gotten married right away. They did not attend university, as they did not see it as the best use of their money, when it could go towards supporting the family. They also feared that she would experience discrimination as a multi-cultural and bi-racial woman. Her mother stopped talking to her for three months after she went away to school, but eventually came around when she called her mom and said, “you don’t want this for me because you’re afraid for me, but what I’m doing is because of you guys. It’s because you’ve inspired me to try to better myself, and you’ve made sacrifices so that we (she and her sister) could do these things.” They believed in playing it safe, but Paz believes that part of it was, “I was their voice in the world, and they didn’t want to lose their voice.”

Please check out this beautiful and emotional story! Click here to read the fantastic reviews, and to purchase Plantains and the Seven Plagues: A Memoir: Half-Dominican, Half-Cuban, and Full Life in paperback or on Amazon Kindle.

We are currently recruiting males to be apart of a new lifestyle podcast that will discuss various topics such as dating, parenting, police brutality, entertainment and more. If you are interested in regularly being apart of the crew or being on our email list for guest opportunities, please contact us at queenmediacollective@gmail.com with a brief introduction including your age, occupation, interests and Instagram name if applicable. Once we receive your inquiry, we will reach out to schedule a phone screen to see if it is a good fit.
"Ashley didn’t like the twins. They tried their hardest to sabotage her relationship with Nas, and, eventually, they succeeded. “You still look good, Nas.” Nas turned around and couldn’t believe he was looking at the only female he’d ever truly loved…besides Rebecca." @_thediaryofshe gives us a glimpse of Chapter 4 of her novel "Let's Be Friends" only at Queenmediacollective.com.
@darealmichaela1 and @tcarriermusic on set of @recklessbehaviortheseries season 2!💕
Here is the official trailer for @recklessbehaviortheseries Season 2! It premieres on YouTube Tuesday, June 1st at 7PM/PST.
Still feeling the Mother's Day Love over at QMC 💕💕
Tristan is a new character in Season 2 of @recklessbehaviortheseries. He is an established doctor who is very intelligent and also extremely supportive. 💕
My Tweets