It’s a crazy, surreal, indescribable feeling when you realize that life is not random — that it has purpose. When you realize that there are signs everywhere of choices you should make, directions to take, validations of your gut instincts, it can feel overwhelming. It can be confusing, but I’ve found that the more you make peace with the idea of following the signs, the more things start to make sense! I do believe that if God/the divine universe wants a certain outcome for you, then it will somehow come true. What is meant to be will be. But if you are tuned into and following the divine signs in your life, you can navigate to the destination with intention. You can avoid the pain and confusion of just reacting to things when they happen, and even decide between different routes that will get you to your destiny.

I have been noticing signs most of my life, though for the most part, I resisted them. It seemed scary and uncertain, the idea of spending your life putting together pieces of a puzzle without any knowledge of the bigger picture. I still don’t know where it’s all heading, but four months after starting this writing journey, I have started to see bits and pieces of what it might look like. What I’ve also realized is that everything that has happened to me and that I’ve learned along the way was preparation for this very chapter in my life.

I believe there is a reason for everything. More and more, I trust the process. The past makes sense now. Maybe, the reason I was not able to change my legal status earlier in life, is that I was meant to be a DACA recipient and transfer to San Jose State when I did. I was meant to meet my husband in San Jose when I did. It simply would not have happened otherwise. I believe that I was meant to be able to return to Brazil when I did. It was only on a particular day during my trip to Brazil, that a set of choices could have led to something magical happening– another sign.

Earlier this year, I returned to Rio de Janeiro with my family, and on December 30th, we had decided to spend the day at Pão de Açúcar (Sugarloaf Mountain). That morning as I tried to decide what to wear, for some reason I opted to go with an all-white outfit. Here’s the thing, I didn’t just “feel like” wearing it. It was like a little voice in my head was telling me to wear it. I had actually been planning to wear that outfit the next day, on New Year’s Eve, because that’s the custom there. The feeling nagged at me for a few minutes as I considered other options. Most tourists in line for the gondola lift wore colorful tropical clothes and I almost regretted not wearing something with more personality. But it wasn’t until the end of that day that my outfit choice would matter.

After watching the sunset from the top of the mountain, we took the cable car down, and  noticed something was going on at the nearby locals’ beach. My cousin explained it was a ceremony to worship Lemanja, the goddess of the sea. There was a large group of mostly Afro-Brazilians singing and dancing along to tribal drums. They were all wearing white. I had the chance to join them and blend in, as if I knew what was happening, as if I belonged. No one questioned it. It was one of the most beautiful experiences of my life. 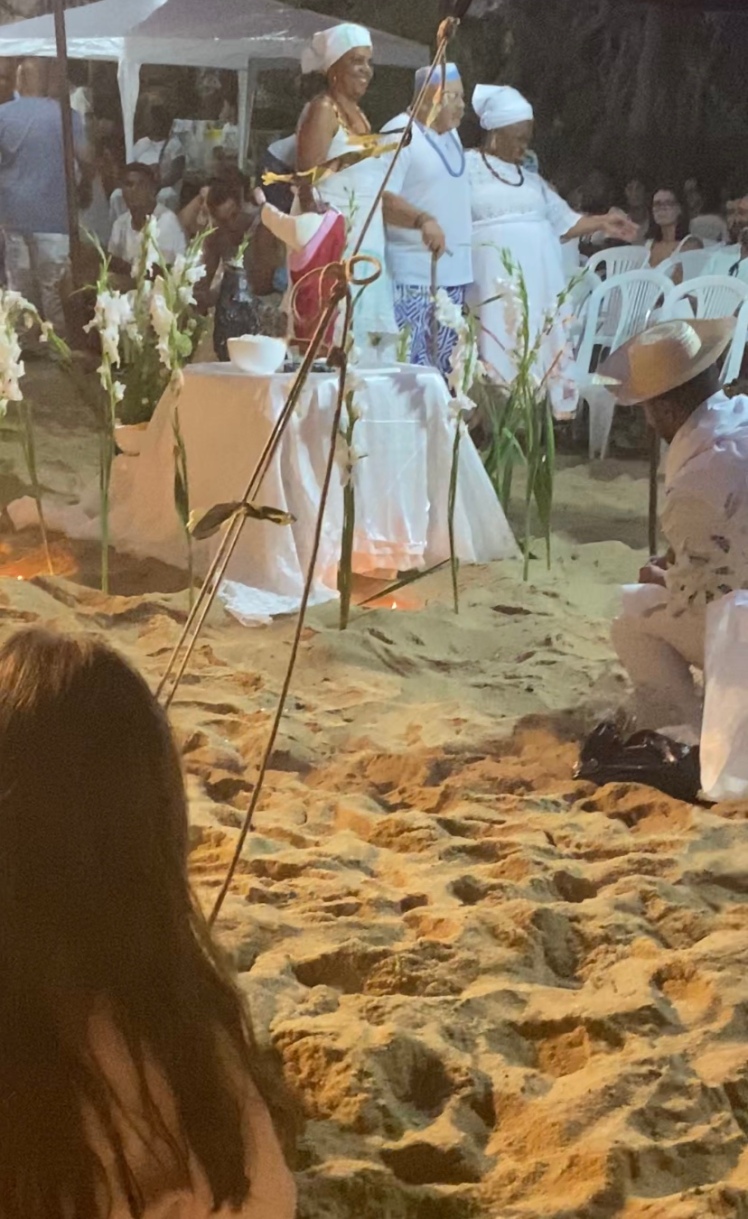 I have never seen something as unique as this ritual known as the Festival of Lemanja. There is something so genuine and innocent about this underground ceremony performed in nature, that is genuinely spiritual, and untainted by any notions of capitalism. I was amazed to learn that a religion created by Brazilian slaves has endured all this time and its followers resisted the great pressure in Brazil to be Catholic. Especially in a city where, anywhere you are, you can look up and see the statue of Christ.

This moment came at a time when I had been praying for guidance, and for a divine sign to let me know what I should do. In the fall, I was considering becoming a writer for Queen Media Collective, but I honestly had reservations about being as vulnerable as I have been. This magical moment in Brazil to me, felt like a sign that I should always follow my instincts, that following your instincts can lead to amazing things! To me, it was also a sign that my calling has something to do with empowering people of color. I did not know that I would be writing about race relations in Brazil. The subconsciousness of Brazil’s brand of racism is something I have struggled with parallel to being undocumented. Being an Afro-Latina has up until now, been such a taboo topic. When I wrote the piece, Black Lives Matter In Brazil, Too. #VidasNegrasImportam, it felt like I was screaming into a void. I started to question it. Then, just days after my article was published, a Brazilian source I follow, reported record sales of books on racism in Brazil. The timing was right. I know that now. Trust your instincts and the process, always.