In a time in our country where causes for celebration are few and far in-between, Alonge Hawes has reason to be festive. The auteur and his critically acclaimed series Black On Both Sides were big winners at this month’s Cult Critic Movie Awards.

Black On Both Sides was awarded Best Web/New Media and Hawes himself was awarded Best Director. Black On Both Sides, whose first season premiered in October of last year, has been lauded for its portrayal of black professionals who must master the art of “code-switching” in order to thrive and ascend at their retail job. It was given 4 star reviews from online publications Indyred, 22 Indie Street, and Reelromp. It was named by Black Talent TV as one of the top 21 series of 2019. The series was also a three award nominee at the 2019 Minnesota Webfest and was awarded Best Screenplay by the 2020 Oniros Film Awards.

Hawes is no stranger to victory at the Cult Critic Movie Awards, his previous series Blue Collar Hustle, for which he created, wrote, produced and starred was nominated for two awards for its first season, winning Best Web/New Media.

Black On Both Sides was recently renewed for a second season by Seeka.tv, to go by the new moniker Black On Both Sides: Sankofa. Seeka.tv is the world’s largest streaming service for independent content, with 2,000 episodes spanning across more than 150 shows. The second season is expected to premiere in Fall of 2020. Alonge Hawes also recently signed a series development deal with streaming service JARO Media for a digital project slated to debut before the end of 2020. 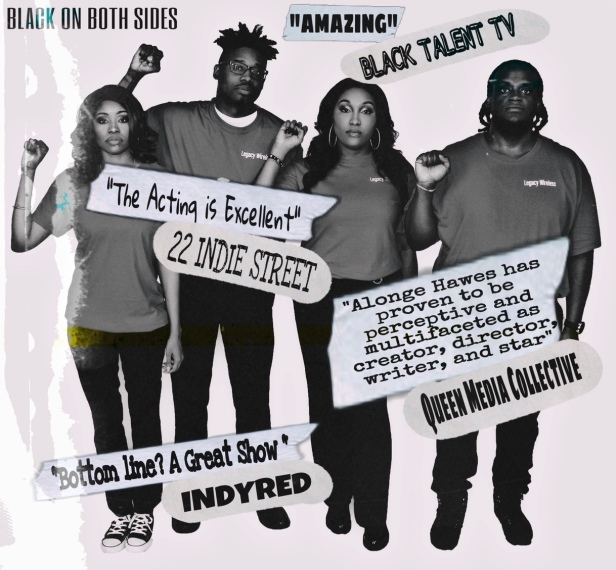 Black On Both Sides is created, written, and directed by Alonge Hawes. Who also serves as show-runner and executive producer alongside George Reese. The first season was lensed by Jairus Burks and the second season is to be helmed by Asante Watkins. The series stars Hawes as Anansi Moor, Julian Robinson as Henry Gill Scott Heron, Kiara Woods as Maya Patterson, Shani Hawes as Nandi Chisholm, Scott Piehler as Cyrus Alexander, Quentin Williams as Saul Matthews, and Roberto Cruz as Quintoni Mason. The series is produced by Jamal Mcclendon, Rodderick Fedd, Shani Hawes, and Asante Watkins through the A Million Stories One Pen entertainment banner.

Check out the teaser for Black On Both Sides: Sankofa below.